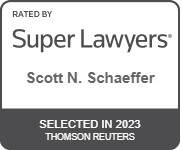 “You could almost say I did not become a lawyer, so much as I was born into it. I have worked with my dad, Michael Schaeffer, on and off for over 25 years — doing everything from answering phones to filing. That experience taught me the level of commitment KSR shows to its clients.”

Scott Schaeffer’s law practice at KSR is focused on commercial matters. He represents creditors in all matters including collections, restructuring and claims in bankruptcy. And he also represents businesses and individuals in business formations and business transactions, debt restructures, real estate transactions and related matters.

Aside from Scott’s family ties to law, one of the things that prepared him most for this career was five years working as an e-business consultant prior to attending law school. As a consultant, Scott learned how to streamline and create efficiencies. In helping clients solve their legal problems, he applies the same business skill to find ways to create efficiencies and design processes to help make his clients successful.

As a consultant, Scott often heard people say they do not want to hear how they could not do something; they want to find a way they can. That stuck with him, and he carries it over to all his clients — striving, always, to get results and find creative solutions.

Whether you are an individual or an institution, the creditor’s rights attorneys at KSR offer efficient, aggressive, and professional representation in pursuing your goals.

As a financial institution, you have many different requirements in dealing with borrowers, guarantors and even other institutions. The banking law attorneys at KSR will work to preserve your interests and assets as if they were their own.

Given the legal complexity and number of parties involved in commercial real estate, your interests and assets demand the experienced, unflinching counsel our clients have relied on since 1977.

As specialists in a broad range of family, business, and labor law, our litigation attorneys offer in-depth experience to advance your rights — both in and out of the courtroom.

When unforeseen circumstances put your business at risk, take advantage of our longstanding experience counseling banks and lenders and put it to work for you.

When legal matters touch your home or other individual real estate investments, our attorneys can help.

When money troubles strike, get the help you need to put your finances in order.

When it comes to construction, the foundation for success rests on a solid contract — one crafted with your interests at the forefront.